Lots of things I would do were I benign dictator of this country. Banning car alarms would be one. And this would be another:

To all those who do not go to airports often, THIS would be required reading before each trip. And to get a good idea of the resentment and outright anger caused by disobeying these most basic rules of courtesy and efficiency, THIS would be required listening. Oh, and a required signed disclaimer stating that any injury to one's person as a result of infraction of these rules is the injured person's responsibility only.

In a nutshell, standing on the left is an affront to my very German sense of efficiency (and I am a huge proponent of the motto "lead, follow, or get out of the way"), and if I bowl you over, you had it coming.
Posted by Uncle Spike at 10:48 AM No comments:

I draw the line at Christmas Eve church services where the pastor, such as he is, actually says "Scrooge was the kind of guy who would take the zip out of everyone's Christmas doo-dah."
Posted by Uncle Spike at 9:47 PM No comments:

Things have kinda switched around here since a post I made a few years back about what makes Christmas...well, Christmas. The new stuff:

1. Love, Actually - Sappy, sappy, and trite. Love stories, all done in that lovable British accent. (Those Brits, so quaint...talking about love to each other while filming porn scenes together. And so charming! Flying to the US on a hunch to try to score chicks because Yankee chicks are such suckers for British accents! Well, um...yeah. Guilty as charged.) Also, I honestly think I would consider switching teams for Keira Knightley in this movie...she is so insanely adorable and effervescent and beautiful. But it'd be all off if Andrew Lincoln (the insanely gorgeous guy with a pulverizing crush on her) showed up, since I got a pulverizing crush on him when I first saw him. And finally, Emma Thompson and Alan Rickman. Oh, and some awesome music. And Hugh Grant in the only role of his I've ever been able to tolerate. And Liam Neeson as the coolest, most supportive dad in the world for...oh, just see it already. You'll love it. Even if you don't. You still will.

2. The Sound of Music - Speaking of sappy and trite. And overplayed. And sickly saccharine. And you know, I don't care. I've always loved this movie, and always will. I do keep it to one, maybe two showings a year, but Christmas is always a must.

3. Egg nog. Some things never change. Especially if you find a local dairy that makes egg nog. OMG but delicious. I've been drinking it by the quartful lately. Yes...that good. (Oh, and I don't bother with any rum or bourbon or whiskey or amaretto in it. Ruins its lovely smoothness.)

4. Cooking. Of course. After about four years, I think I've finally perfected making meringues, using a decorating tube and all. Peppermint and chocolate (with some flavoring...cinnamon or orange, usually) are the perennial ones. But then there's the fudge. The spritz cookies I tried this year that turned out great...all 7 dozen or so of 'em. The orange butterscotch oatmeal cookies. And I'm sure I'm missing one here. Oh yeah...my faves from years ago: the corn flake marshmallow wreaths, with cinnamon dot holly berries. I may have to make those next year, too. (I haven't even touched on the chocolate mousse pie or creme brulee...but I already brought those up.)

5. Ru Paul - Ho Ho Ho - This kinda straddles the line between quaint and fun. Recommended, even if only for "All I Want For Christmas" (...is my liposuction...and my cheek implant, and my chin implant, and let's see...my butt should be risen.) Ru's vamping is kinda amusing, too. But it does tend to get old after a spin or two.

6. Skiing - Well, we'll see. Mr. Man and I are headed up to the mountains with the whole clan. And lots of us ski. Problem is, I haven't skied in a few years, 'cause last year's snow was nonexistent. And since that time, I have been lifting lots of weights, but any sort of endurance training has been MIA. This came through loud and clear two years ago as I was skiing some blacks. Form was good, sure...but only for about four, maybe five turns at most before my thighs began burning fit to kill me. I was the last one down, usually, and people were asking me if it was my breathing that was a problem. Nope. Oh...and not only was this two years ago, this was also about 20 pounds ago. (It has not escaped my attention that some of that 20 pounds has found its way onto my calves, the likes of which are wedged into my boots so tight my feet may go numb.) So next week should be reeeally interesting. I'll report back...if I survive.

7. A new car! No, I'm not kidding. Brand-spankin' new. A Ford Fusion hybrid - a deep cobalt blue that's utterly gorgeous. Voice controls like you wouldn't believe. Navigation. Adaptive cruise control (so if there's a car in front of you, this car will automatically slow down). And an auto parallel-parking feature I cannot WAIT to try. Santa arrived early this year, and was extra generous. I'm not sure what I did to deserve it, other than drive my old, long-loved and lamented Subaru into the ground. The only downside goes along with skiing: we'll see how well its front-wheel drive self does up in the mountains, particularly with the snow that's supposed to start falling tomorrow and not let up much until Christmas.
Posted by Uncle Spike at 1:18 PM No comments:

Labels: 100% fun, giving guilt a good name, good good things, i remember way back when, it's all about me, this is why you're fat

Labels: a knuckle rap and a dunce's cap, good advices 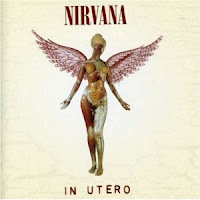 I'm thinking it's because my first year of college sucked fecal cheeseballs. I mostly had a great high school career and succeeded in large part because I had a very well-defined schedule at all times. Once I hit college, that framework vaporized, and I realized how little discipline and ambition I had on my own, and what had only supposedly been my antisocial tendencies suddenly came out loud and clear. I was, by my reckoning, supposed to land at the front door of college, and continue soaring. Instead, I freefell and crashed. Homesick, withdrawn, lonely, and feeling utterly out of place in the land of cows, colleges, and Midwestern Lutheran contentment, I felt like someone could say "boo" to me, and I'd fall apart in a million shards of broken glass.
Not one month after I began my freefall, Nirvana provided part of my soundtrack. No trainjumper, I, I was not a big fan of Nevermind. "Smells Like Teen Spirit" was okay, but there was something about it that just didn't hit me the way it was hitting everyone around me, and the same went for the rest of the album. But since I was beginning my college DJ gig, I had to cater to the whims of college radio, and that required me to embrace Nirvana. As it turned out, In Utero was a pretty damned great album. As broken up as I was becoming, I at least knew someone who was suffering along with me, unafraid to put anger, anguish, self-destruction, brutality, defiance, and depression in such cathartic music. It provided a perverse foil to the good, wholesome Lutheran girls and boys around me, and I delighted in it.

The pop shit here didn't really grab me. You can take your "Heart Shaped Box" and your "All Apologies." Hell, even take "Rape Me." (And yeah, that's all "pop" in the harshest sense of the word.) The songs I really resonated with were the really soul-baring ones that went along with the most abrasive noise that Nirvana could come up with (with one exception). To wit:

Frances Farmer Will Have Her Revenge On Seattle - Uh, okay Kurt. I'll indulge your loopy song title. Just howl "I miss the comfort in being sad" a half dozen or so times, so I know we're on the same wavelength, and all will be forgiven.

Milk It - This is kinda the musical equivalent of what was becoming my life mantra at the time: that which does not kill you warps you for life. I've never heard a 4/4 time signature be played so obliquely and unrecognizably. And Kurt slurs so badly here you can barely make out "I own my own pet virus/I get to pet and name her" before screaming out "DOLL! STEEEEAAAAK!" as loudly and derisively as he could. Whatever that all means.

Tourette's - Place this one up there with Sonic Youth's "Nic Fit" off of their nifty Dirty. You got a simple four-chord progression, drums that bludgeon you at breakneck speed, and some totally unintelligible yelling. What more do you need for a one-man mosh pit in an cinder block and glass shard room?

Radio Friendly Unit Shifter - God DAMN. THIS is, I'd argue, Nirvana's pinnacle. All the rage that Nirvana had to offer, spurting in all directions, suddenly became laser-focused, despite the deranged feedback undulating through the whole song. Kurt didn't scream out the lyrics for once; he dead-panned them in a truly frightening way, made all the scarier because they were just that side of inscrutable. Except for the chorus, a simple "what is wrong with me" repeated over and over again that echoed what I thought every day. And as loud as the rest of the song is, the ending is a seismic speedball that grows uncontrollably and threatens to demolish anything in its path.

Dumb - Here's the exception. Soul-baring, but lounge-intimate and quiet. I really, really got this one. For someone who prided himself so much on his brains, and for someone who had so successfully cultivated a close circle of friends in high school, I sure felt stupid and out of place my first year at college. So of course I was gonna identify when Kurt murmured "I'm not like them, but I can pretend." And like willful Chinese water torture to my psyche, I absorbed every iota of meaning when he droned "I think I'm dumb" over and over and over. It was self fulfilling destruction. At least for that first year.

(Nice bit of trivia I just saw, courtesy of our good friends over at Wikipedia: In Utero was recorded in Cannon Falls, Minnesota...just fifteen miles from my first home away from home. Somehow so apropos.)
Posted by Uncle Spike at 1:37 AM 1 comment:

Labels: i remember way back when, I'm a teenage lobotomy, it's all about me, Yo - turn up that station...
Newer Posts Older Posts Home
Subscribe to: Posts (Atom)