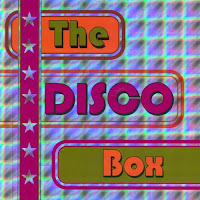 2001 was a banner year for me. I had broken up with my ex that January, and moved out a month later into a studio off of NW 21st Street in Portland. The ensuing six months was the best time of my life up to that point. So that spring, as a present to myself, I strolled down to the local music store and picked up this hunk of fun.

Labels: 100% fun, Attack of the Killer OGTs, giving guilt a good name, good good things, it's all about me, Yo - turn up that station...

Or: Foods that make my life worth living.

Orange and vanilla. When you combine these two and consume, magical things begin to happen. I fondly remember a joyride in southern Minnesota as a college kid, wherein I purchased and ate a whole box of Creamsicles. Well, almost. I was kind enough to give a few bites to one friend, and let a second one eat a whole one. But the other 10 1/2 were all mine, and slid down my gullet like honey. That was my dinner, and I felt great afterward. It's all been downhill from there. (See also: Stewart's orange cream soda, orange/vanilla soft serve in ice cream cones, ice cream floats with vanilla ice cream and mandarin orange Slice..and yes, it HAS to be mandarin orange Slice. Accept no substitutes.)

Carbonara. Here's my theory. Some glutton with cast-iron arteries decided that alfredo sauce just wasn't decadent and unhealthy enough. A parmesan cream sauce only goes so far, amirite? So said glutton decided to add more butter, cream, fatty pork (pancetta, guanciale, bacon...take your pick), egg yolks (and yolks only, because the egg whites were just too...I dunno...South Beach omelet-esque?), and voila! But then the health food mavens screamed bloody murder. So M. Glutton threw in a few peas or caramelized onions to appease them. Good GOD-amighty, eat some of this, and you're as good as comatose for the night.

Borsch(t). I'm not kidding. But first: I grew up with You Can't Do That on Television on Nickelodeon. Remember that disgusting chef who always put boogers and loogies in the burgers? Apparently he also made borsch; the kids asked him why it was called that, and he joked that it was what everyone did when they ate it (cue kids charmingly puking at the table). But then I went to Russia and discovered that this much-maligned soup could be SO heavenly. The key? An ingredient that I've yet to find over here: smetana. Loosely translated, it's sour cream, but sour cream just falls apart and curdles in borsch. Smetana (accent on the second syll-AH-ble, please) is like thin yogurt in consistency, has a smoother taste, and mixes perfectly with borsch, turning it a delightful pink. Oh, and lots of dill, please. Lack of these two ingredients will render this soup inedible to me. By the by, spelled correctly with or without the "t." In Russian, it's spelled without the "t," while Yiddish adds it.

Coconut. And you probably don't like it. That's fine. More for me. I'll happily get sick on macaroons, add coconut milk to smoothies and cereal (with rice milk), frappefy it with ice, orange juice, and vanilla (see above) for a heavenly mock-orange julius, slurp hot Thai coconut milk soup, follow it with coconut curry chicken, and snarf down gargantuan slices of coconut cream pie (that are over 1/2 whipped cream).

Pho. The Vietnamese have given us this humble beef-and-rice noodle soup to nurture us through frigid, snow-bound days. You get a huge bowl of the stuff, bring your nose down to the bowl and inhale the lime, beef broth, and basil combination as your glasses steam up. Smile with the deepest of gratitude for something so pleasing. Add some Sriracha, and slurp away. Comfort food that blows chicken soup out of the water.(Although it kinda makes you wonder: why such a hot soup from such a hot country? Wouldn't it seem more appropriate for, say, Norwegians to come up with something like this to warm you up in the winter?)

Khachapuri, khinkali, and Khvanchkara. Don't sweat the pronunciation. Three Georgian (as in Caucasian) foods that are just heaven on earth, and that's meant more literally than you'd think. Georgians like to say that God traveled around the world, distributing food to each region. God decided to keep the best for him/herself, but underestimated how high the Caucasus mountains were. God tripped and fell, and the best food fell upon Georgia. After enjoying a few Georgian feasts while in Russia, I totally get it. Georgians know how to party and EAT like there's no tomorrow, and Georgian food as a whole is the best I have ever had.
Khachapuri is a simple light baked bread with melted cheese as an appetizer, served hot. Khinkali are luscious, juicy, almost buttery meat dumplings. And Khvanchkara is some of the sweetest and fruitiest red wine you've ever had, just this side of wine coolers. (Also recommended: Kindzmarauli, if you can't tolerate the really sweet stuff.)
Posted by Uncle Spike at 9:54 PM 1 comment:

Labels: first we COOOOOK the chicken, giving guilt a good name, good good things, this is why you're fat 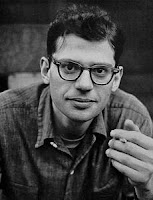 Meanderings through the synaptic clefts of yours truly on this fine late spring day...

- "I'm Not In Love" (I just have the song in my head, not the sentiment.)
- This bee kinda sucked, no? Major props to Anamika...she done well...but as a whole, the scene this year reeked of unfairness. For once, I'm glad I wasn't a part of it.
- So, really...what AM I gonna be when I grow up? 'Cause this stint here isn't the right fit, and at 35, I should really get to figuring it out already.
- Totally digging my new rebounder. Fun stuff, and I feel all sorts of body parts moving and flexing that I didn't know could before.
- When can I go into the supermarket and buy what I need with my good looks? (Heh. Thanks, Allen.)
- This makes me happy. (Again, thanks, Allen.)
- This also makes me happy.
Posted by Uncle Spike at 1:54 PM No comments: 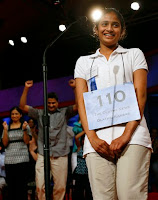 Here's Kavya Shivashankar, last year's very deserving winner, modestly rejoicing after clinching "Laodicean." But don't let her composure fool you. That's almost certainly the best moment of her life...up to that point, at least. Most other people's reactions in the auditorium were more like her parents in the background.

Anyhow, this year's bee is coming up. Finals on Friday evening at 8:00; catch the details here.

I already wrote at length about the bee last year. (And aptly enough, I'm posting this 21 years to the day after I won Nationals. Not intentional, actually.) So indulge my solipsistic side. What made 1989 for me? (Aside from the obvious, of course.)
- The Capitol Hilton. No cooler hotel EVER. Well, at least until the bee moved in 1996 to the Grand Hyatt Washington. Wait...no. This one was still the coolest, if only for two things. The competition was held on the 2nd floor above ground, and not three claustrophobia-inducing floors below terra firm. Also...

- Trader Vic's, part 1. Probably where I nurtured my nascent tiki fetish, and definitely where I indulged my love of pina coladas. (Virgin at the time, folks, virgin! I was only 14! Geez...)

- Trader Vic's, part 2. Much to the consternation of my fellow spellers, I was not present at the post-banquet spellers-only party. The last thing I wanted to do was while away the evening doing nothing but sign autographs. I felt I'd earned the right to do whatever I pleased that night. So once the banquet was over, I turned to my pal and fellow speller Joel, and said, "Let's get outta here and go to Trader Vic's." Thus began one of the greatest evenings of my life, wherein Joel and I just talked about all things bee-related, and then some. Major bonding, the type that happens rarely in a lifetime, at best. And years later, we're still in touch. (The Trader Vic's didn't enjoy the same fate; when I returned in 1995, I was crushed to find it was gone.)

- Questionable songs, part 1. To be specific, Pink Floyd's "On The Turning Away." Meh, okay version from Momentary Lapse of Reason. But the version I had going through my head was from Delicate Sound of Thunder - exponentially better than the original. This one was with me ALL DAY - literally, from the second I woke up until I nailed that final "r." I even ran it through my head so that I spelled the last letter at the moment the final verse finished and the grand outro began. Video of me at that time shows me deep in thought. Well, kinda. I felt confident I had the bee in the bag, but I was just playing the song in my head, waiting for it to get where it needed to, and I knew the moment couldn't be rushed. Milking it, milking it...

- (Really) Questionable songs, part 2. I can't believe I actually had "Wind Beneath My Wings" running through my head nonstop from shortly after I won for a few days afterward. Actually brought tears to my eyes once or twice. TOTALLY ashamed to admit this.

- (Really, REALLY) Questionable songs, part 3. Of all the cracktastic CDs I could have gotten with my prize money, I chose those two toe-tapping classics: the Batman soundtrack by Prince and American Dream by CSNY. (Sold within a year after purchase, folks.) And for some reason, "Got It Made" ended up being my expression of elation in the weeks following June 1st. Kind of a light sound, but a bummer of a song. Only lyric that really applied: "Glad that you got it made...you are the only one I've ever seen do what you done."

- Getting lei'd. Huge banquet the night after the bee. The speller from Hawaii somehow found me a lei and presented it to me that night. Cooler than cool. It looked great, smelled wonderful...how could I put it aside? I happily wore it all night.

- River Phoenix. No less an authority than the Washington Post branded me a River Phoenix look-alike. And the Post is renowned for writing among the best bee articles anywhere. If the Post says it, it must be so.

- The Chattanooga Times. For writing a feature article about "darkly handsome Ojas Tejani," the Chattanooga rep and the 2nd place finisher, while totally branding me the bad guy. Seriously, it was cool. I knew the press rep for the Times at the time...she was sassy and fun, so it was a great inside joke. I'm sure Tennesseeans appreciated it, too.

Labels: good good things, i remember way back when, I'm a teenage lobotomy, it's all about me, NSB
Newer Posts Older Posts Home
Subscribe to: Posts (Atom)