At 25, I was watching the Grammys, and saw Lauryn Hill, who is as old as me, win five Grammy awards. And at 25, I was in the middle of naturopathic school. But for the first time, I felt like I was squandering my life. I literally sat up and asked out loud, much to the befuddlement of my friends, "God...what have I done with my life?"

1. Keep up a high morality code with integrity.
2. Ignore what the TV says.
3. Single-handedly redefine the genre and ideals of American literature by the use of short essays. In short, start a new era.
4. Make a couple of classic albums.
5. Be a teacher.
6. Be a researcher or doctor.
7. Become a new Socrates - as great a thinker as he was.
8. Live life deeply and lovingly.
9. Love.
10. Be religious.
11. Be me!

Yeah, I was one ambitious motherfucker, wasn't I? Needless to say, I've not made a single album, let alone a single song. I get drawn into TV far more than I would like. And bringing American literature (VERY loosely defined) into a new era was apparently not up to me, but the tech-savvy inventors of blogs. And Socrates? In college, I derided one of my friends for being down on herself because she wasn't as great a thinker as Dostoevsky was. Um...oops. So much for that. (At least I won't die from hemlock poisoning.)

But life happens. Laundry needs to be done. Someone needs to bring home the bacon. Mundaneness settles in. And also, goals change. But having said that, a strong, stoic core part of me maintains that there's still a LOT of living to do, and a LOT of ambitions yet to realize. Gotta keep moving.
Posted by Uncle Spike at 8:50 PM 2 comments:

Labels: I'm a teenage lobotomy, it's all about me, ramblings of the omphaloskeptic 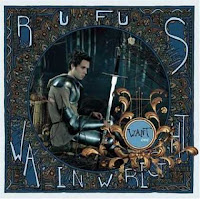 Rufus Wainwright is an acquired taste. His voice is nasal and anoretic (especially on his debut, where I don't recommend starting), and his musical tastes run pretty skew to popular music. Classical, opera, folk, and Tin Pan Alley are the founts from which his inspiration springs, and he has a slightly aloof, wry, and condescending way about him. His compositions (funny how that word came to mind before "songs") can be dry and subtle, often bereft of hooks, and only reward you after multiple listenings or upon being placed in an appropriate context. Or they can be sweepingly melodramatic, full of romantic and impressionistic flourishes that go down as easy as a bowl of the richest chocolate mousse - and leaving you feeling about as queasy afterward. Oh, and add in the fact that he is a gay man; this colors his writing considerably. (Can you imagine a straight songwriter name-dropping Bea Arthur? Or writing a song from the point of view of a young woman reminiscing about her first high school crush on a man?) Needless to say, he hasn't been gracing the top of the pop charts.


What he has done is make some of the most gorgeous, intelligent, moving music of the new century; even an authority as high as Elton John has branded him "the greatest songwriter on the planet. " Choosing my favorite Rufus song is no easy task. There's an awful lot of gold, particularly from Poses and the two Want albums. But "Dinner at Eight" (from Want One) stands above the rest. This love song to his father ironically resonates with anger and bitterness throughout, and exemplifies the brutally personal turned universal.


Rufus's family (father Loudon III, sister Martha, deceased mother Kate McGarrigle, aunt Anna McGarrigle) is an immensely talented group of folk musicians. In fact, when Loudon first happened on the scene in the early 1970s, he was branded with that dreaded "new Bob Dylan" title that no one could live up to. Despite that, Loudon - and the rest of the family, really - is no stranger to critical acclaim, even if they haven't achieved widespread popularity.


They are also just as flawed as humans can be and they air out their familial trials, tribulations, and secrets in their music with a willingness that makes the listener sometimes feel exploitative. (See Loudon's tribute to his then breast-feeding son, "Rufus is a Tit Man." See also Martha's paean to her dad, "B.M.F.A." It stands for "bloody mother fu..." uh, yeah, you got it.) "Dinner at Eight" fits right in here...and although I don't know the Wainwright/McGarrigle canon like I suspect I should, I bet this song sits near the top of the heap of these expositions.

From a musical standpoint, "Dinner at Eight" does away with the typical opulence, and begins with a quiet, stately piano arpeggio that belies the drama directly ahead. "No matter how strong," Rufus warns his dad, "I'm gonna take you down with one little stone. I'm gonna break you down and see what you're worth...what you're really worth to me." As an orchestra quietly builds behind him, he recalls an argument between he and his dad one night; it's easy to imagine it might have been a battle of egos between the well-established father and the rising star son.


But just as soon as it seems Rufus turns away from the argument, dismissing his part in it, he suddenly stops and stands his ground. "Why is it so...that I've always been the one who must go? That I've always been the one told to flee? When in fact you were the one...in the drifting white snow who left me?" Bitter accusations were seldom so poetically put. Cue a weeping harp mimicking the snow falling, and you now have Rufus's mom, Kate, weeping herself, out of the anguish of knowing such a strained relationship existed between two men she loved so much.


Suddenly, the music swells, and with it, Rufus's righteous anger. "So put up your fists, and I'll put up mine. No running away from the scene of the crime." It's the moment of reckoning for his father. Reconciliation and peace, or a lifetime filled with resentment and anger. Either way, it's his dad's choice. "God's chosen a place somewhere near the end of the world, somewhere near the end of our lives. But till then, Daddy, don't be surprised if I want to see the tears in your eyes." Rufus is asking for an apology, an admission of guilt, for the hard facade to break down just once. "Then I'll know...you loved me." Just that much. But you get the sense that Rufus doubts it, as he repeats the beginning of the song, re-establishing his defiant stance against his father.


"Dinner at Eight," for all its beauty, is achingly uncomfortable, and Rufus does his best to heighten the tension. The music ebbs and flows with emotion, with little regard to a regular beat, and creeps to a near-standstill, tellingly, as he sings "in the drifting white snow, you left me." A slow, painful death trumps a quick one any day, and Rufus is going to make damned well and sure his dad knows how much it hurt feeling abandoned.


So, yeah. Wrenches your heart out, this song does. But in the most beautiful manner. Well worth a listen.
Posted by Uncle Spike at 1:38 PM No comments:

Labels: Attack of the Killer OGTs, Yo - turn up that station... 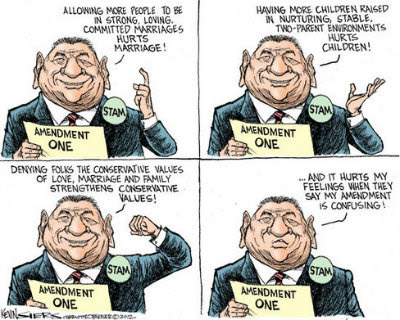 Really? What the everloving fuck?

The language of Amendment One in North Carolina, passed today: "Marriage between one man and one woman is the only domestic legal union that shall be valid or recognized in this State.” Hmm...think about that. A "domestic legal union." This basically means that not only would same-sex gay & lesbian unions would not be legal, but any sort of common law living arrangements (and the benefits appertaining thereto) would also not be legal. Never mind that there is already a law banning same-sex marriages. The fucktards in NC decided that wasn't enough. Now, this law pretty much undermines some domestic violence protection, screws with child custody issues, and - yes, that most visible of rights - curtails hospital visitation privileges. Way to preserve the sanctity of good old-fashioned one man-one woman Christian marriage (because of course, there's only one kind, right?) and ensure the stability of society.

Of course, the fact that many people didn't understand what they were voting for didn't help matters, either. Gotta love those informed voters.

About five years ago, I attended a cousin's wedding in Fayetteville. The minister, douchenozzle that he was, saw fit to insert some political comment during the blessing about how a marriage should only be between a man and a woman. Were I not surrounded by loving and supportive family (and loving and supportive of my cousin's marriage myself), I would have stood up and stomped out of that church posthaste. As loudly and obtrusively as possible. Just infuriated me.

Now, because I can be a cruel-hearted and vindictive bitch, if I lived in North Carolina, and were a law enforcement official of some sort, I would gleefully enforce this law to its fullest extent, making damn well and sure that those who voted for it and failed to understand its ramifications would be punished to the fullest extent of the law for their ignorance. Of course, for those who voted against it, I'd feel pretty heavy-hearted and frustratingly duty-bound to follow through with state-mandated responsibility, dragging my feet the entire way.

The requisite disclaimer: I have plenty of family and a few friends who hail from North Carolina (see above). With a possible exception (and even then, I kinda doubt...), I know for a fact all of them would have voted against this hateful amendment. A few of them even went out of their way to campaign against it, which I'm grateful for. So I can't make a blanket statement on how all North Carolinians are ignent and hateful.

UPDATE: Check that. Apparently, when you have a Republican-controlled House, they see fit to filibuster this bill until the midnight deadline, and you don't have room to gloat. Once again, on the wrong side of history.)
Posted by Uncle Spike at 9:18 PM No comments:

Back in the summer of 1989, I spent three weeks on the hot southern coast of France with a bunch of German peers under the guise of learning French immersion-style. Thankfully, it wasn't terribly cerebral. Yeah, classes in the morning, but the afternoons were filled with juicy peaches and Orangina bought from roadside markets, trips to the beach, crepes from a beachside stand, and nights out on the town with friends. And sweet, sweet freedom, thousands of miles away from parental control! I also got exposed to this fun, cheesy song and video, which spearheaded a tiny, short-lived fad. The lambada was the international equivalent of dirty dancing, and that video was EVERYWHERE, mainly because Kaoma was a French band. Even so, "Lambada" would have forever disappeared from my tiny brain were it not for a certain recent single by JLo: "On The Floor." Glad those memories turned back up again.

Posted by Uncle Spike at 2:06 PM No comments: