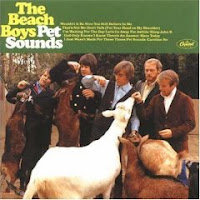 Everytime I hear the higly reverberated harpsichord and French horn (those staples of all classic rock and pop) announce this majestic song, I almost always say, "Please stand for the national anthem!" This is one of the best pop songs ever written and performed. Ever. And it may be my very favorite pop song.
With "God Only Knows" (and with the rest of Pet Sounds, for that matter), the Beach Boys progressed beyond the simple teenage ditties glorifying hot rods, surfing, and girls, girls, girls. Not that those songs were bad...many of them (I'm thinking "409," "Little Deuce Coupe," "Surfin' USA," "Surfing Safari," "Fun, Fun, Fun" and "Barbara Ann," just for starters) have justifiably remained classics and formed the backbone of much pop and rock ever since their release. But soon the Beach Boys moved on to much more mature subject matter, chord progressions, and instrumentation that all deserved to be compared favorably to the Beatles.
This heartfelt song defines the ambivalent nature of human love, swinging from nonchalance to desperate longing. It begins like practically no other love song:"I may not always love you," and even echoes the sentiment in the beginning of the second verse: "If you should ever leave me/Though life would still go on, believe me..." But the second half of that verse swings back immediately to desperation, as Brian Wilson sings, "The world could show nothing to me/So what good would living do me?/God only knows what I'd be without you."
As for the instrumentation, after the harpsichord and French horn come jingle bells and some clip-clop percussion resembling, randomly enough, a horse's gait. But it works. Strings that echo "Eleanor Rigby" follow, and during the final verse, one of the most gorgeous, lilting flute duets ever put on tape. Every instrument (save the flutes) return for the ending fade.
And of course, those amazing harmonies the Beach Boys are famous for are on full, glorious display during a luscious bridge that's over far too soon. Thankfully, they come back, echoed over and over again during the song's fadeout - again, teasingly short. (See the movie Love, Actually for a wonderful rendition that fulfills the desire for this song to - almost - never end.)
My only quibble with this song is that it is just too damned short for its own good. Such amazing sounds, harmonies, and sentiments deserve to be on display for much longer than just under three minutes. In this day of ADD-riddled pop culture, it's easy to switch the station or click to the next song on the iPod if the song - or even just a part of it - sucks. But "God Only Knows" not only compels you to listen for the entire song, but leaves you begging for more once it's over. It's that good.
Posted by Uncle Spike at 2:00 PM No comments: