What I wish on this watershed of a day... 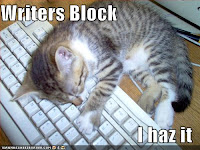 With apologies for the time being for you, my thousands of readers hanging on every word. Writer's block is a bitch. Well, that, and the fact that I'm preoccupied with leaving my place of work this Saturday and moving on to a better, more appropriate place for my skill set. (GAAH! Did I just say that? "Skill set"? Corporate-speak, get behind me!)

Just to let you know that, yes, there is someone still manning the controls up here. Coasting on autopilot for a bit, though. Life will calm down, inspiration will strike, and regular blogging will resume momentarily.
Posted by Uncle Spike at 9:44 AM No comments:

"There is no aspect, no facet, no moment of life that can't be improved with pizza."

I have just finished watching the last two episodes of Daria: The Complete Animated Series. Oh, and the two hour-long movies, "Is It Fall Yet?" and "Is It College Yet?". And the Mystik Spiral video "Freakin' Friends." And the cast interviews. All in one night. Obsessive? Owned.

My ultimate judgment? Given that it's a cartoon about the trials and travails of high school, it's only appropriate to seal the whole thing with the most symbolic of high school judgments.

Seriously. This subject matter is timeless. High school angst? Sibling rivalry? Heartless lifemanship? Cliques at their worst? Teenage friendships at their best? First loves (and loves lost)? All handled with the skill of an expert swordsman.

Maybe I'm stuck in a permanently pre-adult, purely puerile (say that five times quickly) point in my life. Maybe I'm just clamoring for the teenage years I wish I could have back, just so I could do them right this time, dammit. But Daria is utter brilliance. I never thought I could be so riveted to a teenage girl's monotonous angst. And I really feel that although it encapsulates the angst of the 1990s high school scene, its theme is truly for the ages.

But then again, I have to think: in high school, I really was Daria...only on the male side of things. My voice was as monotonous as you could get. I was dripping with angst and self-doubt with every hallway corner I turned. I tried to sabotage my first real relationship (first unsuccessfully, then...well, is there a successful way to end a relationship, really?). I never had a faithful sidekick as devoted and cynical and witty as Jane Lane (damn, Daria was lucky), but the friends I did have definitely all fit the bill in one way or another. So I'm really, really biased. (Check that: my first real relationship? She was my sidekick. And I kicked her to the curb. Damn you, sexual incompatibility!)

Looking at the whole series in chronological order, I can definitely see things I never recognized in the past. To wit:

But some things that were established firmly at the beginning also remained stalwart to the end.

Seeing Daria (both the character and the series) just affirms my position in life. I'm intelligent, cynical, somewhat antisocial, somewhat reclusive, yet constantly evolving and learning stuff about human nature. And the fact that a network as influential as MTV found a character and series as non-mainstream and subversive as Daria (see also: My So-Called Life) and could support said series for five seasons gives me hope for persons such as myself. (Of course, MTV has since devolved into a state of putrid swampstank the likes of which Daria represents its absolute antithesis. I mean, MTV hardly shows music videos anymore, right? It's time to pull the plug. Like about a decade ago. We can all live without The Real World, which is, like, so real, btw.) But if Daria can thrive, I can too, right?

Then again, we may never know. The final movie, "Is It College Yet?", showed everyone going separate ways. Daria broke up with her beau, Tom. Brittany promised Kevin she'd wait for him...while crossing her fingers behind her back. All the main characters wound up going to completely different colleges. But a silver lining of sorts: Daria and Jane ended up going to different colleges, but in the same town: Boston. But there ended the season. Maybe continuing to pursue Daria: The College Years might have been pretty tough. Still, given the caliber of what the team behind Daria had turned out, it would have been possible, and possibly very compelling. But the world will never know...just like that damned Tootsie Roll commercial.

Labels: daria, good good things, i remember way back when, I'm a teenage lobotomy, it's all about me

For any of you chipper whippersnappers stumbling across this here blog who don't remember Michael Jackson circa Thriller, don't understand his appeal, or perhaps weren't born yet, check this video out. It's made of unadulterated marvelous white-sequined AWESOME. Here's what an amazing, unifying force of nature he was, shot just a few days after his untimely death. I'm hard pressed to think of any other pop star who could cause this sort of spontaneous celebration amongst complete strangers. (Oh, and for the record...the geeky tall white guy in the center of most of the video? That'd be me, making a complete fool of myself and not caring one bit...if I were on that subway.)