Only The Strong - Midnight Oil 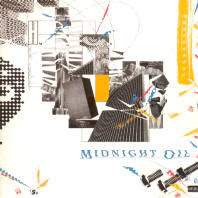 Let's go back to 1994. I'd completed my hellacious first year of college. I was reeling from my first sexual experiences with a man, subsequently falling HARD for him, and freaking out about what it all meant. (Of course, I was in no space to talk to anyone about it.) I was in the midst of a terrible existential (no, really) crisis. The conclusion I came to from not knowing the purpose of education, and knowing that I had devoted my entire life to education scared me to death. Add in an uplifting class on the resistance to Nazism, with special emphasis on the Warsaw ghetto. Add in a class on Russian literature, heavy on the gulag experience. Also add in a severely mind-warping tutorial on Nietzsche. I was so fucked in the brain by the time my first year was done.

The only thing that saved me was my weekly radio shows, wherein I'd escape and play music only for me, me, me, and scream at the powers that be for two hours, 1984-style. So at summer camp that year, where I rocked the pool and the lake as the aquatics director, I began plotting my second year. It would be, again, all about me, me, me, but this time, it'd be 100% of the time, and not just those two hours a week. I'd live life exactly as I wanted, and if anyone got hurt in the process, fuck 'em. (As it turns out, I'm generally restrained enough that this particular mindset ended up hurting only one person, and it was in the service of ending a relationship that shoulda never begun in the first place.) I needed some major inspiration, so I went wild on the music.

My malaise that fall was blown away in a testosteronic gale of noise and punk: the Ramones, Wire, the Sex Pistols, the Descendents, Minor Threat, Sonic Youth, and the Dead Kennedys, to name a few. (SO shoulda gotten Helmet, too...alas, that was not to be for a good 13 more years.) And the following spring, I picked up the long-overdue 10,9,8,7,6,5,4,3,2,1 from Midnight Oil.

Midnight Oil has always been one of my favorite bands. I can't think of another band that's so forthright, intelligent, consistent, and filled with warlike righteous rage. And on this album, packed with powerful calls to action and personal statements, "Only The Strong" is one of their fieriest.

The lead singer, Peter Garrett, is a wild, menacing presence, a nearly 7 foot tall behemoth of a man, with a shiny bald pate, intense eagle eyes, and some of the most spastic dance moves ever attempted onstage. The entire album is worth it just to hear Garrett snarl, "Speak to me, speak to me. I'm at the edge of myself...I'm DYYYING to talk." And on each chorus, his singing goes from righteous declamation to furious anger to shredded, bloody vocal cords. Truly awesome and somewhat frightening; singing this wild and unhinged is seldom heard outside of Minor Threat or the Pixies. And likewise, the guitars swoop and careen barely in tune, sounding like metal being warped out of shape. Drums hammer out a martial beat with pinpoint accuracy, interspersed with machine-gun breaks and breathless moments of silence.

It's weird to say this, but the album version is the most intense version I've yet heard...the live versions aren't quite up there. Regardless, to say this song is an adrenaline rush doesn't go nearly far enough. Put on your headphones and listen to "Only The Strong" at full volume. If you don't feel punch-drunk and cleansed by the end of this one, you must be on some sort of narcotic. You want to live at the edge of life, at the edge of yourself, push boundaries, rebel against powers that be, and take what is rightfully yours? Here's the beginning of your soundtrack.

Labels: I'm a teenage lobotomy, it's all about me, Yo - turn up that station...

The pin sighs into the eye!

Random thoughts, just 'cause I can...

Labels: giving guilt a good name, Gleeks of the world UNITE, it's all about me, say now WHUT?

Yeah. In so many ways, heaven = nothing.

Life's pretty damned good when you can escape somewhere to do nothing at all. Sleep. Eat. Read. Hike. (Some...not too much.) Play the pee-ya-nuh to your heart's content. And ruminate on life.

Only issue with this one was the weather. Left Denver when it was -17. All thrilled and such to be leaving and heading down to the warmth of Tucson. Except I landed in Tucson and it was 25. Yeah. Record low temperatures for three days, people. Sunny, to be sure...I mean, it is Tucson, right? But lows of 18 do not compute in the land of saguaros, prickly pears and agave. It is February, after all, so I don't expect it to be shorts weather all the time. Still...gaaah.

Otherwise, food was great, company was great, it was wonderful to sleep and take naps whenever the hell I wanted, and eventually it did get above 70 for a few days. Oh, and did I mention the silence? 23 hours a day of it. Enough to drive many people crazy, but to me, that's just balm to the soul. Actually, silence = no talking. It didn't keep me from hooking up the tunes or yes, playing the piano (which I hadn't done any of since...well, since last time I was there, lo these 4 years ago.) Both with headphones, so as not to disturb anyone else.

While I was there, I got to decompress for a few days, then take a look at my life, see where I needed to go next, then make plans for the future. Exciting stuff. Really. It's just when you get back home and are sideswiped regularly by...well, real life, you realize how difficult it is to stick to said plans. But worth it.

Posted by Uncle Spike at 2:13 PM No comments:

Labels: good good things, it's all about me, ramblings of the omphaloskeptic, Yo - turn up that station...
Newer Posts Older Posts Home
Subscribe to: Posts (Atom)