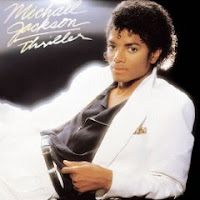 So here's my token Michael Jackson smash note. Because if I didn't do one, I'd be un-American and stuff. Also, for me not to acknowledge the awesome forces that were "Wanna Be Startin' Somethin',"Beat It,"and especially, especially, my GOD especially "Billie Jean" would be treason.

Thriller, yes, did a huge ol' number on me. I remember spending one whole recess in 3rd grade practicing my moon walk. Never did perfect it, really. I wrote all my favorite Michael Jackson songs in calligraphy (yes, calligraphy - with a calligraphy pen with refillable ink cartridges, no less) on my Trapper Keeper. Did I mention I was a nerd? Oh, and then there was that whole Victory tour thing. Nosebleed seats be damned - the day after that concert, I was well-nigh OBSESSED with all things Jackson.

But I have to give my props to what I ultimately thought was the essential fourth wheel to accompany the aforementioned triune: "P.Y.T." The first verse alone killed me. Only Michael Jackson could serenade his "Tenderoni" and not make her sound like a pizza condiment - he made it just about the damned coolest name ever. And his pleas to her to "spark my nature, sugar fly with me" were totally irresistible. But to this landlocked kid with no exposure to anything remotely Valley Girl-ish (other than my sister's copy of Fer Shur! How to Be a Valley Girl-Totally! - now out of print, malheureusement), hearing him yell, "Let me take you to the max!" just sent me overboard. Some guys just had all the moves and said all the right things and were too cool for words. And Michael Jackson was WAAAY at the head of the pack in that regard. Incidentally, the rest of the song was great, with the call-and-response bridge (thanks to Janet and LaToya) and whatever that damned chipmunk was singing at the end of the song - we may never know.

So, yeah, there's my Michael Jackson tribute. Poor guy was America's answer to Icarus - flew so high, and plummeted to such depths. I hear someone recently say, "Too soon! Too soon!" Too soon? Really? Sorry...but to this cynic's eye, MJ ceased being relevant just about the time "The Way You Make Me Feel" hit the airwaves (with "Man in the Mirror" and "Black and White" being the few exceptions). Worst of all, though, he just plain turned too weird, too white, too oxygenated. Going into a store and purchasing Dangerous or even browsing around the Michael Jackson catalog was tantamount to announcing to everyone in your class that you were a gaywad. Regardless of how great the music may have been inside. But in 1982, not liking Michael Jackson was just plain not an option. You might as well say you didn't like breathing.

Posted by Uncle Spike at 6:38 PM No comments:

I've mentioned this one before. During my tiki summer of 2004, I discovered a recipe for a mai tai that I thought would fit the bill...something tropical, sweet, fruity, and strong. Yes, yes, yes, and HELL YEAH! Depth charge to the liver and the pancreas in one fell swoop. When I made one of these hummers, that did me just fine for the night. Once, I decided to have two. I think I lost my way to the bedroom that night and just passed out in the hall. (This is even less impressive knowing that at the time, the living room recliner and the bedroom were separated by, oh, maybe 20 feet. And the hall was straight.)

Anyhow, ever since that time, I have referred to this particular mai tai recipe as the drink of death. You don't drink this one lightly. You drink it to get wasted. For the uninitiated, it tastes like slightly flavored ethanol with red food coloring. (Incidentally, it looks MUCH redder than this picture portrays, thanks to grenadine.) The recipe comes from the New York Bartender's Guide. (So it ain't Trader Vic's. Whatever.)
So, the Mai Tai of 2004, the Drink of Death:
2 shots light rum
2 shots dark rum
1 shot orange curacao
1 shot lime juice
1 tbsp grenadine
1 tbsp orgeat (almond syrup)
Mix together in a shaker pre-filled with ice. Serve on the rocks in a big glass. With a serious drink like this, ya don't need no stinkin' paper umbrellas or cherries or pineapple garnishes. But they might help it go down smoother.
Posted by Uncle Spike at 8:19 PM No comments: