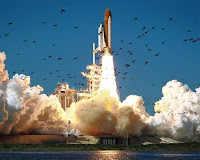 "Twenty-five years ago today..." begin the major headlines today. Between JFK being assassinated and 9/11, this was the most salient and terrible tragedy for which an entire generation could ask, "Where were you when...?"

Everyone was glued to their TVs to see history in the making. A large crew, one of the largest in space shuttle history. Included in it were the first Japanese-American, the first African-American, and two women. Sally Ride was the first woman on a space shuttle, having flown years before, but even more to the point, this flight included the first civilian (who also happened to be a woman). An ebullient, wide-eyed schoolteacher from Concord, New Hampshire, Christa McAuliffe symbolized and galvanized the excitement that Americans had for the space shuttle program. (Remember her picture in Life magazine, where she was frozen in a Toyota-like pose, leaping for joy? She was chosen from among thousands of schoolteachers who applied to fly on the space shuttle. Including my own 5th grade teacher.)
You can say, "what's especially tragic about this is..." and come up with any number of things. But for me, two things stand out. First, since a schoolteacher was on that flight, it was a guarantee that more children would be watching this particular launch than any other in history. And more children would see the most tragic and painful error that NASA had to endure. Those children, so excited about the space shuttle program - and about space exploration itself - would suddenly witness the program's potential for fatal flaws, for the fact that sometimes people die in the service of exploration, of advancement. Children start off thinking that adults are powerful, that they don't make mistakes, and ideally, it's just gradually that they realize that they are just as fallible as anyone. But for that realization to hit with the force of a sledgehammer is excruciating. With that comes some painful growing up. Suddenly, a bit of innocence and idealism is gone forever. And that's why it was such a "where were you when" moment for everyone.
The second thing was something I only read about today. Surely, I figured, no one could have survived such a huge explosion. I mean, thousands of pounds of hydrogen gas suddenly exploded, subjecting the crew on board to a walloping shock wave, insanely searing temperatures, and shrapnel flying at tornado-like velocity. No one could have survived that, right? Well, read this, taken from today's MSN.com slideshow: "Investigators suggested that some of Challenger's crew members may have survived the explosion itself but died in the fall down to earth." Horrific. That may qualify as the worst sentence I read all year.
Posted by Uncle Spike at 9:00 AM 1 comment:

Labels: i remember way back when 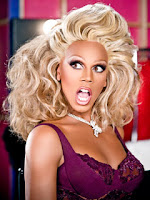 I do love me some drag queens. I mean, they got honest-to-god bravery, the likes of which 95% of men do not have. In such a male-centric world, these beautiful creatures dare to upend gender norms and not only dress as women, but dress as the wildest, most extreme women imaginable. They press buttons, they instigate, infuriate, provoke, and create. And they contribute far more to popular culture than most people imagine. If nothing else, they were an essential, crucial part of the group of gay men and lesbians who rebelled at Stonewall. With their fabulous high heels, they kicked the asses of those cops and began a revolution the likes of which have reverberated around the world and will continue to for years and years to come. If you know and love a gay man, lesbian, bisexual man or woman, transgendered man or woman, anyone questioning, or a nongendered person (yes, these people do exist, rare though they are), you owe a debt of gratitude to your local drag queen.

So it's no surprise that I also love me some RuPaul, and the wild creation that is RuPaul's Drag Race. I've been a fervent believer from the beginning. Even when I didn't have Logo on cable, I watched all the episodes online. From the first season, I saw Denver reprazent with the inimitable, insane Nina Flowers, who landed second place. (I still think she was robbed, but just barely; Bebe Zahara Benet is an astonishingly beautiful woman.) That gurl, more than any queen I've ever seen, transcends traditional drag (if there really is such a thing), and transforms herself into a creature that is beyond gender. And let me tell you - Nina's makeup skills are SICK. No one can touch her. (Incidentally, I had the excellent fortune one summer day at the local waterpark to meet up with Jorge Flores - Nina out of drag - and I can tell you, at least at this juncture, he was as gracious and friendly a guy as you could ever meet. Hugs, smiles, and genuine greetings for everyone, new and old friends alike.)
Saw tonight's premiere episode of the third season, and, well, here's my take. Bullet-pointed, natch. (You know me too well.)


Little known fact: I have done drag twice in my life. First time was at a queer ball at a college just across the river from ours. FUN, FUN, FUN. Had my friends doll me up, and my best friend loaned me a slinky black dress and her heels. Somehow, I fit them. I thought I looked hideous, but apparently I looked good enough that - I swear on all that is true and right in this world - lesbians at this ball were hitting on me. Weirded me out, and also: do you know how self-defeating that is? Talk about your genderfuck. On the plus side, I performed onstage that night. I did "Respect" by the queen of all queens herself, Aretha Franklin. Didn't have it choreographed at all, but went up there with nothing but attitude. And amongst some really tough competition, I landed my first dollar tip, but even wilder, I won the tiara. (Well, one of 'em. To be fair, I shared the title with a guy who performed a perfect "Respect Yourself" by Madonna that was honestly choreographed to within an inch of its life. Goes to show you that in drag, either way will take you far.)

The second time, I was performing at our med school's no-talent show. ("What? You have no talent? Not an excuse. Get up there and strut your stuff!") In a black dress, lavender hair, and a BRIGHT red boa, and dubbed Lady Belladonna, I performed Peggy Lee's "I'm A Woman" with as much sass as I could muster. Brought the house DOWN. Pictures and even a video of my performance still exist...somewhere. I ain't telling.

Around this time each year, I start to go a bit batty. The holidays are over, but days are still short. Work piles up. The levity that comes with warmer breezes and more daylight is just out of reach. Pagans and wiccans (of which I am not one) acknowledge this in their holiday Imbolc, which welcomes the spring hopefully just around the corner. Groundhog Day is the more popular version of Imbolc, depleted of any sort of pagan (read: threatening to Christianity) meaning.

Part of me digs the high pomp and circumstance of ritual that accompanies some holidays. But at this time of year, I'm just DONE with that sort of thing. The simpler, the better. And I yearn for the introversion that eluded me over Christmas - literally, the darkest time of the year.

The February after I graduated college, I still found myself living in the town of cows, colleges, and contentment. And really hating life for the above reasons. So, on the friendly advice of one of my professors, I took a long weekend and holed up in a monastery in the middle of nowhere, just to ground myself. Did next to nothing except read some, write some, sleep a lot, and exist in warm, comfortable silence, with all my most basic needs provided for. It was heaven. And I returned, rejuvenated (even just a little bit) and ready to live life again.

Since then, retreats have been an essential contribution to my sanity. I haven't done them every year, but I miss them when I choose to forego them. And the last one I did was in 2008. So I'm heading out again this year - aptly enough, on Imbolc itself - to a small place in Arizona to indulge myself again. The place is awfully spartan - few creature comforts, simple food, and enforced silence for all times except dinner. Austere and forbidding landscape, too, full of cacti and pungent chaparral. But the place did offer a nice library, with lots of religious and philosophical writings. Physically, it might seem horrible. But the last time I was here, in 2007, I described my experience there as drinking a big triple thick rich dark chocolate-and-Bailey's milkshake for the soul. Unbelievably wonderful, but also so deep and intoxicating, it was almost too much for me to take. I can't wait to go back and drink deeply again.
Posted by Uncle Spike at 11:26 PM No comments:

Labels: good good things, it's all about me, ramblings of the omphaloskeptic

How NOT to start a new year...

Item the first: Jägermeister is NOT my friend.

Item the second: Can't remember the last time I got in such a strenuous abdominal/diaphragm workout, voluntary or no. (Note: this is closely related to item the first.)

Item the fourth: How fucking old am I? Shouldn't shenanigans of this sort have ended years ago?

Yeah, decorations, Christmas trees, lots of baking and cooking, parties, and such. But man, does it place a strain on my ability to maintain a clean house! Just loaded the dishwasher to overflowing, and there's still enough dishes to run a second load. Not to mention the other chores I've been neglecting. I'm such a huge fan of simplicity and efficiency, and this time of year, I recognize I have to just let all those values drop for a month or two. But ah...the good a clean house can do for the soul once the holidays are over is just plain bliss.

Good God, this fudge recipe is AWESOME. It's like I've never had fudge before. I'm not even that big a fan of chocolate. Waistline be damned. (And it may well be so now.) A half cup each corn syrup and heavy cream. Bring to a boil. Take off the heat, add 3 cups chocolate chips, 1 1/2 cups powdered sugar, and 1/2 tablespoon vanilla. (A cup or so of walnuts too, if you want 'em.) Stir in and bring back to heat until the chips are all melted. Pour in a foil-lined 8x8 pan and refrigerate a few hours. And slice and eat away.

*The holiday season will not officially end out here in Bum-Fuck Kansas Estates until our post-holiday party on the 15th. Prayers for the longevity of our tree, whose needles are getting pretty damned hard, are welcome.
Posted by Uncle Spike at 2:40 PM No comments:

Labels: first we COOOOOK the chicken, giving guilt a good name, it's all about me, RANA RANA RANA, this is why you're fat
Newer Posts Older Posts Home
Subscribe to: Posts (Atom)